Failing to File Tax Returns is A Criminal Offence! 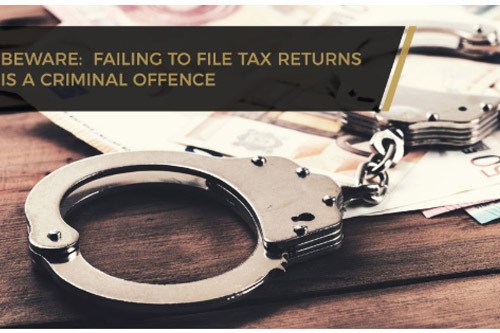 There are some people who are unaware that you can get a criminal record if you don’t file a return. The only exemption is if you earn under a certain threshold – check with SARS or your accountant. However, even in this case, tax accountants advise that you still file a return.

It could be that you have been filing returns and have reached pensionable age or are unemployed. In this case, if you or your tax accountant are still getting returns mailed to you or them, it is best that you mark the return as a “NIL RETURN” and mail that to SARS.

However, if you are earning a regular salary and don’t submit a return, even though tax is being deducted from your salary, you could be in for big trouble. SARS recently made public knowledge 10 people who did not file returns and they are now saddled with criminal records.

In the past, people were just fined, or ‘penalised’ in SARS terminology, but it appears those days are gone and now the tax collector is getting tough.

This is a scare tactic, sure, but it will indeed make people sit up and take note. If there is a threat of incarceration, there will always be the added impetus to ensure that it doesn’t happen.

It could have…it just didn’t, until now

It’s no use after the fact proclaiming that this is not what you meant. In SARS’ eyes, that’s precisely what you meant, otherwise you would have submitted a return. SARS will tell you that this result has always been available for it to use, it’s just that its never used it before.

You will similar practice taking place all over the world. In the US, it’s been commonplace for a long while and the IRS has taken a much heavier hand than SARS.

Many people over the years have been jailed as a result of non-compliance, and they have come to expect that result as well. There is no such thing there as being ‘heavy-handed’. The IRS is merely doing its job, and SARS is following suit.

If you are criminally charged here, and there is tax owing to SARS, you will have to pay penalties on top of the tax owed and having a criminal record. The tax collector has the option of jailing you for a period up to two years. Rather submit a return, why don’t you?

There are also other criminal offenses like false information or incomplete filing. It’s always best to communicate with SARS regarding your employment status, your contact details and any other information that may be pertinent to your case.

SARS is getting back on track now after a couple of years of not being up to the standard that it used to be.

But with changes at the top have come a new zest and zeal in pursuing its status as a world-class and highly efficient tax collector. With this mind, know that it will be going great guns in all avenues to ensure that whatever it is owed, will be coming into its coffers.

If you are scared that you know you owe taxes, don’t just avoid the issue. That will only make things worse. SARS has always been open to communication, even if you must sit and wait a while in the SARS halls to be seen, so go and discuss your case. You can always come to an agreement with the payment owed them, like paying in monthly increments.

Just don’t go getting a criminal record. That’s the last thing you need – or want.